As a trusted partner standing shoulder-to-shoulder with our customers, FTC is working hard to help federal government agencies adjust and pivot in response to the dynamic and challenging COVID-19 crisis. Whether at the front lines facilitating global health information exchange and medical training to build capability and preparedness, or burning hot to develop a custom COVID-19 reporting dashboard on a rapidly accelerated timeline to better serve Veterans at point-of-care across the nation, the following projects from across our portfolio highlight just a few of the many ways the FTC team is helping our customers respond to the COVID-19 crisis.

As FTC’s Chief Delivery Officer Thomas Kenny stated: “These are unprecedented times, and our customers are grappling with an urgent need for better communication, data processing, and resource management to be able to respond to this crisis. We’re proud to stand with our partners in providing urgent, critical services to help them navigate these uncharted waters.”

In an emergency HotFix to ensure that Veterans and their dependents can receive the care they need – and the benefits they deserve – during this global health crisis, the Community Care Reimbursement Systems Development (CCRS) Team updated over 100 procedure codes (amidst a batch of 7226 codes in the reference data set) within the VA Community Care Network invoicing system to reflect preventative care, treatment, and telehealth care associated with the pandemic, compressing the development, testing and production schedule into less than ten days in response to the urgent need for critical health services. 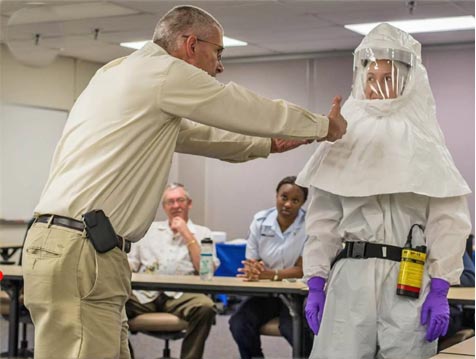 During this worldwide pandemic we’re all seeing how essential education, communication, resource, and information exchange truly is for global health and FTC is proud to be at the front lines of global health information exchange alongside the Air Force Defense Institute for Medical Exchange (DIMO). Since September, 2019, the FTC DIMO Team has supported curriculum writing, database management, translation and interpretation support, while also providing the Mission Specialists, Security Specialists, and other program experts to write curricula, handle complex embassy requirements, and manage international funding and financial mechanisms for this program that brings governments and dedicated healthcare professionals from around the world together in training programs and courses designed to build capability and capacity in disaster preparedness, communicable disease prevention, and other current and critical health topics.

In the past few months, the FTC Team’s Mission Specialists have planned and executed over 80 missions worldwide, a record number for DIMO, which has historically performed less than 50 over the same time period with the same resources. This impactful program has become a critical source of world-class, globally-focused, healthcare education and training to nations around the world facing this novel virus.

In response to the urgent need to capture specific data relating to COVID-19 care to support VA’s frontline response to the pandemic at point-of-care nationwide, the FTC BISL Team is providing surge capability through the rapid development and deployment of emerging requirements for the National Surveillance Dashboard & Reporting System to capture and synchronize data related to COVID-19. At the onset of the pandemic, this team provide dthe first COVID-19 analytic and reporting requiement modification in just two days. The team has since settled into a surge pace of two releases to production per week to accommodate emerging analytic and reporting needs and continues to manage the flow of data through this analytic and reporting system, validating report quality and ensuring the timely analysis for use by the highest levels of government fighting the pandemic.

With the development and build-out of a custom SharePoint intranet site, the FTC Innovation Cell Team has changed the way the VA shares information, their training course catalog, and educational resources for their Employee Education System (EES), creating a centralized platform for messaging, resources, and communications as just one component of their multi-pronged contract with the VA. More than ever, at a time when information is in high-demand due to COVID-19, this portal has become a critical point of communication for frontline VA healthcare providers to access essential information they need to respond to the crisis. In quick response to the VA’s urgent need to communicate enterprise-wide, the team recently developed two new video messaging subpages within the site –a “Daily Video” page featuring a video recording of a personal message directly from VA’s Executive in Charge, Dr. Richard A. Stone, updated daily and integrated into the page through the FTC Team’s API framework, and a centralized “Watch Now” video repository featuring multiple channels of video training content easily searchable by keywords, with an archive of over 5,860 VA-vetted videos that are easily searchable and sorted into sub-channels based on user need. The analytics behind the portal’s usage are staggering. Within the last month, the site received more than 75,000 unique views and 851K page clicks, with viewers spending an average of more than 15 minutes on the site per engagement. In a matter of one week in mid-March, video viewership jumped from a daily average of 3,800 views to an average of over 14,000 daily views with a total of 1.1M minutes viewed in March!

The contract has also provided the platform that allows the VA to conduct virtual Townhall meetings nationwide, creating dedicated pages with links to downloadable handouts, slide decks and other reference materials for each virtual meeting in short order; with townhall meetings increasing in frequency from an average of four in one month to an average of now four in one day through the month of March, the team’s support of critical information exchange has been invaluable in response to the crisis.